27thApril: Our “press conference” was awesome; emotionally is such a different way to live and although I am not living that way all of the time yet, when I do boy does it feel good. The press didn’t come as they said they would, but those who did come now know our desires and what our intentions are in Kenya.

Thank you all, it was so awesome to share with you and have your support and love.

29thApril: As we set off for Brisbane airport Kerry and Paige announced that we had received a donation for $20,000 for a vehicle and water tanks that we mentioned in our presentation, thank you so much guys. Once I used to say (before I believed in God), that God used to work in mysterious ways, now the mystery is no more, it is how God designed us. Don’t you just love passions and desires, how can we not live this way of life,. God is so Good.

30thApril: Our flights over to Nairobi were pretty good as flights go and my vegan meals were really tasty (we flew Emirates), we had two stop overs, but only for a couple of hours and it was nice to refresh the body. We went through customs in Nairobi without a problem, it really does pay to be open and honest with the authorities rather than try to hide anything.

We are staying at http://www.wildebeestecocamp.com and I am in small tent, that is now under a shed roof as they have had flooding here and the ground is very wet. All the staff here are so gracious and truly look to serve and have such good smiles.

1stMay: Our first day has been to relax and to catch up with ourselves and then the hustle and bustle of car yards looking at vehicles, some contrast, ay! There are four million people living in Nairobi and much poverty. My first impressions are that they may be struggling, but happier than those who seem to have plenty; the façade is not so prominent.

We have connected to a few Kenyans; Kyale (Charlie), a taxi driver who has been driving us around for a few hours daily, looking at vehicles and shopping for tanks ,etc., who is so happy to talk about his disillusionment with his upbringing in the Catholic church and his faith that God’s truth will be told and that is the only way to change things. Then there is Justus an amazing young man who had given up his free time to accompany us ‘shopping’. He has told us some of his life, he is twenty six years old, and I shall tell his story soon.

There are about four million people living in Nairobi and Charlie told us if everyone went home the city would be empty as most have migrated for work when it can be found. There is much evident poverty, with no government support, so you work or starve and as Charlie spoke you could feel his anger at the gap between those who have excess and those who have nothing, which seems to be the majority of souls. I think for the next few days we will be continuing our hunt for a vehicle.

2ndMay: We spent six hours with Charlie today driving around Nairobi’s industrial areas looking at water tanks and finding suppliers for pipes and fittings. It seems that the other four million where on the roads to. Justus came with us and it certainly helped us having ‘locals’ accompanying us in achieving our goals. We have now sourced water tanks, etc., and at reasonable prices, in fact I think we got a good deal and ongoing service. We looked at another vehicle, but all the ones we have looked at just don’t seem right. Paige commented that the right one will turn up when we least expect it and as it happens several hours later when reading an email from Chris (the guy who supplied and installed the solar system), he mentioned a Paster who he had done several jobs for was selling his Isuzu Trooper to buy a new one. The pictures of it look good, the price is what we would like to pay and Chris has used it in remote areas saying it was in really good condition, so we will pursue it tomorrow.

Love to you all
Denis
God is good.

6 thoughts on “We are really here” 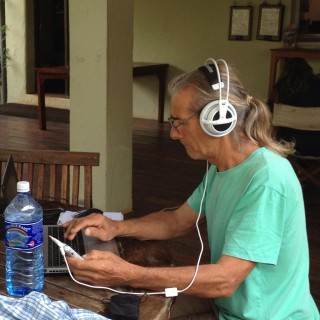 Nearly six years ago I began a journey to find the real me, along the way God came into my life. My faith that God is always with me and desires me to receive their love has enabled me to feel things that were never there before and has now opened another new chapter in my search. It feels that the last six years has been a training session for this next phase, Kenya.

Because not all those who wander are lost...

Finding The Way to becoming Real

Notes Along The Way

I have ignored this land and it's people for too long, now it is time to act.

The latest news on WordPress.com and the WordPress community.